Relic is a fast paced science fiction thriller that explores the possibility of resurrecting and weaponizing an extinct species (Neanderthals). Imagine a scenario in which some rogue, black-ops faction of the military attempts to clone Neanderthals in order to create a superior soldier. This rogue military group, working with a military contractor, inadvertently unleash a past that should have remained extinct. The intriguing storyline shares some fascinating anthropological and biological insights and explores the social and moral issues of such a project, as well as worst case scenarios of a covert military project gone awry. 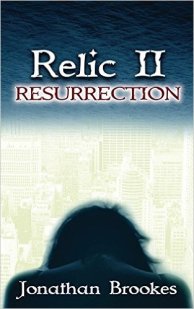 Fact and fiction collide in this high-tension, fast-paced sequel to Relic. A child is born, … its mother dies during childbirth. The race is on to claim guardianship of this orphan, whose genetics are a relic of a lost race. In a perverse twist of evolution, this one child could unravel 30,000 years of Homo sapiens dominance of the Earth.